Evolution of sociality in coral reefs 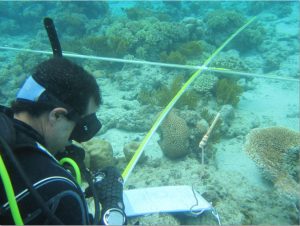 Martin Hing a PhD student from the University of Wollongong, originally focused on the ‘Evolution of sociality in coral reef associated fishes’ however this rapidly changed as two cyclones and the coral bleaching epidemic severely impacted his research. Due to these series of events Martin has changed his project and continued his study using the Australian Museum’s Lizard Island Research Station, on the role that social organisation plays in a species ability to recover from a major impact.

Social organisation is an important determinant of a species survival, foraging efficiency and ability to reproduce successfully, which ultimately affects their potential to recover from disturbances. Martin methodology included “collecting group-size and coral-size data from 16 species of Gobiodon at Lizard Island through two cyclones”. A single species of Gobiodon typically inhabits a single coral head. Each species was categorised as either social (typically found in groups consisting of a pair of breeding individuals and 1 or more non-breeding subordinates) or asocial (groups typically consisting of only a pair of breeding individuals).

Martin’s results illustrate that average coral size decreased after each cyclone as expected. The average group-size of social species decreased after the first cyclone (they became less social) but returned to their pre-cyclone levels 8 months after the event. Martin explained the results as ‘somewhat surprising as previous research has shown a strong correlation between the number of individuals in a group and the size of the coral the group inhabits’. 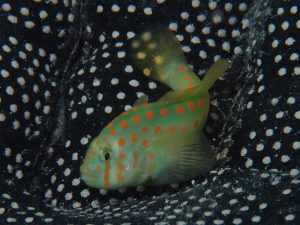 One possible explanation for the breakdown in this relationship Martin points out is the “lack of available coral after the cyclone ‘forced’ fish, that would otherwise have dispersed, into living with other fish in the corals that did survive”. Additionally, the group-size of social species decreased again following the second cyclone, but had not returned to normal 9 months post-cyclone when coral size had decreased even further. The average group size of asocial species did not change after either cyclone despite the same decreases in their coral size. This research shows that species of varying social strategy react differently (in terms of social organisation) to major impacts such as cyclones and that repeated impacts may have long lasting effects on social organisation.

Martin left one final tip for our readers, ‘Learning to dive is the best thing I ever did and helped me dramatically during my undergraduate course. University always teaches you things but when you finally get to learn them in a practical way and see it through your own eyes, this is something you will never forget’.